Seamus left the island the minute he turned 18. He took the first ferry he could get and left for the mainland. When his mother called to see how his life was going, she always mentioned how things were changing.

When he’d lived there, the island had a population of around 440. Forty people and about 400 sheep. He couldn’t imagine that any of that had really changed, but 20 years later, he was finally going back.

His sister was getting married. In fact, she was marrying a guy his age that he’d graduated high school with – Finn. Seamus didn’t have many memories of Finn. He vaguely recalled him as someone who was always scheming and trying to make a quick buck. Hopefully that had changed. Seamus wanted someone more grounded and financially stable for his sister.

Seamus didn’t plan to stay long. His mother wanted him there a day early for the rehearsal dinner. He agreed to be there for the dinner and to stay long enough the next day for the wedding, but he was taking the ferry home that night after the ceremony. He also made his mother promise not to make a big deal about his homecoming.

When Seamus stepped off the ferry, his mother was waiting. Alone. She must have changed in the two decades since his leaving because she didn’t even attempt to hug him. She opened her mouth to say something and changed her mind.

Apparently the island was changing too because on the way to the family home, they passed a department store and even a few chain restaurants. When he’d been here, everything was a small local establishment usually named after a family member who had started the business. A couple of new stores though were not enough to change Seamus’s mind about leaving as soon as he could. In addition to the island’s makeover, Seamus was equally surprised at his mother’s self-control – they drove all the way home in silence.

As they pulled into the drive, Seamus saw his sister, Gwen, taking laundry off the line. She turned in his direction and nodded then continued her task.

Even from the drive he could smell bread baking in the house. A man stepped out onto the porch. Seamus didn’t recognize him but the man waved at him. This must be Finn.

Finn came toward them and said, “Hey stranger. Glad to have you home.” And then without stopping to catch his breath, he continued, “Darla, the morning ferry brought the octopus and it’s not breaded.”

Seamus’s mother nodded. “Not to worry. I think I know a thing or two about frying food. Why don’t you two get reacquainted, I will go look and see what needs doing.” Darla left Seamus and Finn on the porch.

Seamus didn’t say anything. He couldn’t think of a single thing to say to someone he hadn’t seen in over 20 years, especially because he hadn’t known him well to begin with.

Finn, though, wasn’t shy and filled the awkward silence by striking up a conversation. “Can you believe your sister wants calamari at the wedding?” He raised his eyebrows but Seamus wasn’t sure what the gesture was supposed to mean. “Octopus. She’s a strange one – your sister. But that’s what I love about her.”

Seamus just nodded. He was wondering how long he could actually go on this trip without saying a single word.

That’s when Finn smacked him on the back. Finn said, “Look at you. You look different. You must work out. I remember you being a skinny, quiet guy.”

Seamus didn’t respond again. Truth be told, he did go running on a regular basis but he didn’t think he was that different looking than when he was a teenager.

Finn didn’t let the lack of response keep him from talking, “Still quiet though.” He laughed at what he thought was his own cleverness and then smacked Seamus on the back again. Finn continued, “Guess that is a good thing to be. Your mom says you sit around all day reading. I could never go for a job like that. Too much time at a desk.”

Seamus felt the need to defend his job. It was his life’s work after all. “I work for a test company. I edit questions before they are used on standardized tests throughout the whole country. I am also responsible for fact checking the questions.” He felt himself puff up a little and a hint of pride slipped into his tone. “In a way I help shape the future of high school students all across the nation. An accurate and well written test is the key to a good future.”

Finn was nodding along but Seamus could tell that he wasn’t really interested in what was being said. “I get that,” Finn said. “I too am worried about the future. But in this case, I am thinking of my future.” And after a couple of seconds, he added, “And your sister’s too of course.”

“Hey, why don’t you go put your stuff in the house and I’ll take you to the site.” Finn looked really pleased when he said ‘the site.’ He added, “We will have plenty of time to get ready for the rehearsal dinner after.”

Seamus entered his family’s home for the first time in 20 years. He thought he should have felt something more but he didn’t. In fact, he felt like he was entering the house of strangers. He heard his mother in the kitchen working on something. He went in the living room and set his backpack on the couch. Then he walked to the kitchen and told his mother where he and Finn were going. Darla just nodded.

Seamus and Finn rode through town out towards what used to be the Benbro Inn, established and ran by the Benbro family. It had been replaced with not one, but two hotels – a Best Western and a Motel 6. Nearby the two garish hotels that didn’t quite fit into the idyllic scenery of the island was a construction site surrounded by a privacy fence.

When they got to the gate, Finn hopped out and opened the lock. This action surprised Seamus, when he’d been a boy on the island, people didn’t lock up anything. Finn returned to the truck and they drove onto the site.

Finn and Seamus hopped out.

Seamus wasn’t really sure what to think. If the two franchised hotels looked out of place here, what Seamus was looking at actually seemed otherworldly in this setting.

Before him was a miniature golf course. It was called “Adventure Park.”

Finn said as he gestured to the various parts of the set-up, “We were going for an Indiana Jones slash World Traveler theme. So, what do you think?” Finn didn’t wait for an answer. He continued, “It’s going to be a hit. It is going to draw tourists here. Who knows? Maybe someday we could be famous for it.”

Seamus couldn’t believe what he was seeing. Seamus took a step towards the course to take it all in a bit more. One hole had a tomb theme and at the end, the player’s ball had to be hit into a key hole. Another hole had the player shoot around arrows, which were supposed to be like the tomb being booby trapped.

Finn was talking again, “My personal favorite is the last hole. The player aims for the dark stairs. But they’re not really stairs; it’s a collection system to reclaim the golf balls.”

Seamus sat down right there in front of the ugliest thing he’d ever seen. He wasn’t sure what was happening, but he knew he didn’t want this monstrosity on his island. It didn’t belong. 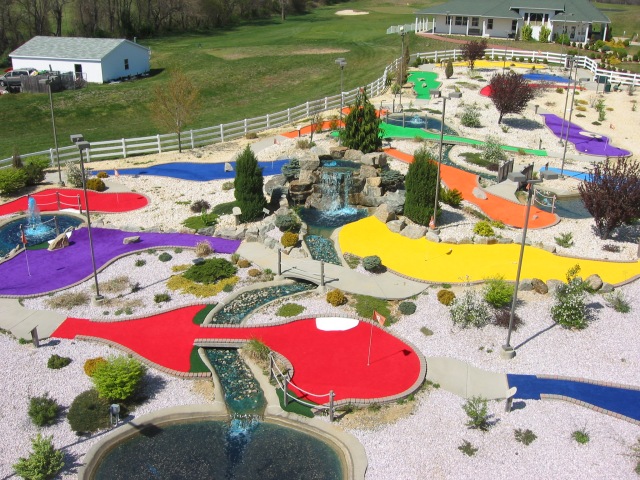