This week I’ve made some progress on my novel, and as I’ve been working this week, the biggest obstacle I’ve encountered is another idea bouncing around in my head.

Ever since I picked up my old draft a little over a month ago, I’ve had several other ideas. Some of them are for short stories that I would like to write or changes to stories I’ve already written, but I am also having a hard time ignoring the idea for another novel length story.

I am very, very, very determined to finish my novel this time around though, so rather than let myself get too distracted, I have set aside a separate journal where I’ve been keeping notes, writing outlines, writing short scenes, or other ideas all related to the second story that my brain won’t seem to let go.

I know I shouldn’t see this as a problem because inevitably I will face writer’s block, so the overabundance of ideas is a wonderful feeling, but it would be nice if my brain would focus! Sometimes it would be nice if there were a switch, code, or something that would kill the A.D.D. for half a minute. 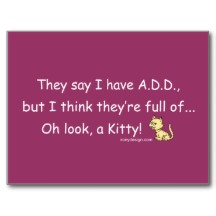