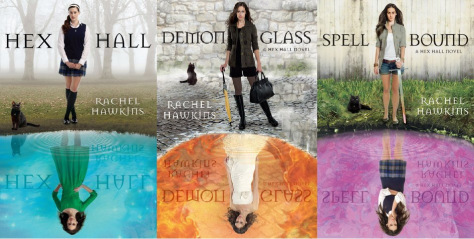 Our Guest Reviewer, Mindy Lavender,  has returned again this month to bring us another young adult review. This time she is reviewing an entire series.

Mindy is my sister, best friend, an avid reader, a historian, a feminist, a youth director, a wife, and so many other things…

Who doesn’t want to read a fast-paced trilogy about a girl who goes to a boarding school for teen witches, shape shifters, and fairies? If that sounds like something up your alley, pick up the Hex Hall series by Rachel Hawkins: Hex Hall, Demon Glass, and Spell Bound.  Hex Hall has a fun and non-complicated plot line. Each installment is perfect for a couple hours of guilty pleasure. What I liked about these stories is that they were fast and easy reads. Not life changing, just fun. I also liked the story because it adds another voice to the world of magical creatures. Hogwarts is great, but what about the kids who don’t go to Hogwarts? What happens to them?

The Hex Hall series tells the story of Sophie Mercer, a half-witch raised by her human mother.  Sophie can’t control her magic and is sentenced to school at Hecate Hall by her estranged warlock father, who happens to be a big shot in the magic world. In the first story, we are introduced to Jenna–the lone vampire student at Hecate Hall, who loves pink and is Sophie’s roommate. We also meet Archer, Sophie’s love interest…who is not really that interesting. He’s handsome of course and smart…but kind of boring. Both Jenna and Archer remain important to the supporting cast throughout the series.

Book one, Hex Hall, primarily deals with Sophie’s difficultly transitioning into life with other magical creatures. She feuds with a trio of popular witches who are very one dimensional forgettable characters. More interesting is the relationship Sophie develops with the ghost, Alice.  Which leads directly into book two, Demon Glass, where Sophie has to deal with the fact that she is half-demon not a half-witch. The action takes places in England (so cool.) She also finds out that her father, and by extension her, were purposefully “bred” by the magic community to fight the “The Eye” (a community that seeks to destroy all magical creatures for the good of humanity.) Book Three, Spell Bound, and my favorite, has Sophie working with the Brannicks against the magic community. (The Brannicks are a group of red headed women who were at one time white-witches. They are considered an enemy of the magic world. Sophie finds out that her mother was once a member of the clan and should be its rightful leader.) The series ends with an epic good vs. evil showdown. I bet you can’t guess who wins?

All and all, the books are good…not great…a six out of ten, but if you need a young adult fiction guilty pleasure read I recommend the series, Hex Hall.