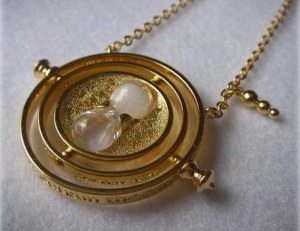 You do not know me, but I am writing to request a favor. You do not know me so I cannot hope that you will grant a request of a total stranger, but I require your aid. It is a matter of life and death. Before I ask my favor, I would like to tell you my story and perhaps then you will take pity on me and grant me your grace and understanding.

My name is Father Opmet. I am a humble member of the clergy, and I dwell in a small seaside village in Northern Spain. I have lived here all of my life. I was never a strong swimmer nor was I cut out for a life at sea. However, I excelled at school, and at a young age, my family decided I was destined for priesthood. I do not regret their decision because a life surrounded by books and learning does suit me well.

Because of my passion for learning, my family even saved to send me away to live for a time under the tutelage of one Father Narl. He is also someone with which you are probably unfamiliar. He was one of the greatest scholars and thinkers to grace this Earth. It saddens me to say that almost a decade ago he passed. My personal problems and the reason I am contacting you began shortly following his death.

I learned of his death through a letter from another clergy member. About a fortnight after that a carrier service knocked on my door. They informed that they had been paid in advance by Father Narl to bring me all of his belongings upon his death. After discussing this with the courier, I looked outside my door to see four wagons full of crates with items piled haphazardly across all of them. Before I could protest that I did not have room for all of those things, men started to carry everything into my small two room quarters and pile things anywhere they could fit. At one point they ran out of room in my dwelling and they began to pile things in the yard. It took them several hours to unload everything and when they finished, I thanked them. When I informed them I had no money to tip them for carting everything such a long way, the head carrier said it was unnecessary. They had been handsomely paid by Father Narl.

Just as they were about to leave, their leader jumped down off his wagon and handed me a letter and was away before I could ask what it was. I recognized the handwriting on the envelope as belonging to Father Narl.

The letter was not what I expected after receiving the entire contents of his life on my doorstep. The short version of it is that he wanted me to have what he had discovered because he felt like I was the only one who could appreciate his work. I admit that I was overwhelmed and perplexed. I knew that of late Father Narl had fallen out of favor because of some of his more outlandish theories, but in most circles he was still a highly respected scholar.

Even when I had been his student, he entertained wild notions about discovering what he called “ultimate proofs.” He truly believed that through ingenuity he could create or discover physical proof of Our Lord’s existence.

It seemed that in his old age he had held onto those notions and indulged his fancies to the point of excess. His letter was cryptic about what specifically he had discovered but it raved about “the thing that would prove IT all.” Of course, in true Father Narl fashion, it did not say what the thing was or what it was.

Even though I found the language of the letter confusing and at the same time I longed to discover its secrets, I knew that I first had to deal with the mountains of crates in my yard and filling my living space.

It took me the better part of a week, but I went through every piece of Father Narl’s belongings myself. Most of the items were junk and I donated them to the appropriate charity. However, some of the items were foreign even to me, an avid inventor since a child. I decided to hold onto these fantastic items and I also kept every handwritten piece of text. Father Narl had been a prolific journalist. I kept all of his journals, and over the next several months I scoured their contents to the point of neglecting my priestly obligations.

One journal in particular kept me up at nights. The journal was about Father Narl’s attempts to discover time travel. Can you believe it? I do not think I slept for the better part of a month when I finally figured out that was what he had stumbled upon. Father Narl’s problem was that he understood the theories behind a lot of subjects but had very little mechanical knowledge.

I was an avid student of mechanical things. I was obsessed with carriages, mills, and trebuchets. Anything that moved that was not a living thing was a personal hobby of mine. I read and reread Father Narl’s journals and then spent the better part of the next decade trying to figure out how to make it work. I admit that I became known as the village loon but then again, everyone had always felt I was a bit off anyway, so their treatment of me did not change that much.

Even though the villagers did not feel differently about me, my fellow clergymen treated me like a leper. I did not let their cruelty deter me though. I have endured ridicule and shame at the expense of Father Narl’s and now my own goals.

Even though it took me a decade to figure out a way to make his invention work, I finally did it. You read that correctly. I know how to do it. I created the device that allows a man to travel in time.

At this point, you probably think I am just some crazy eccentric who has spent too much time in the seawater, but I promise you that is not the case. Before you dismiss me as someone without substance, let me make a plea for your aid once again.

You see, in my studies with Father Narl, he told me, quite fondly of Arthur and his knights of the round table. A central figure in these stories was always you. Father Narl believed that you were the most noble, loyal, and truly good knight that lives.

What if I told you I knew where it was? What would you do? To what lengths would you go to aid your king in his quests?

I have found my own proof, and I know how to help you find yours. I am afraid that this knowledge, these ultimate proofs, will fall into the wrong hands. There have been strange men hanging about lately watching my every move. I do not recognize them, and in a village this size, that is a rare occurrence.

I need your help. I need some where to send my device. If you can provide me with a safe location, I will aid you with your own quest.

I await your response.

With hope that this letter finds you well and noble,

I admit that your letter was troubling to me. At first I admit that I was unsure what to make of your letter. I also admit that I doubted its authenticity. I was tempted to contact someone to check in on you and remove you from a position of religious authority. I was deeply concerned for those in your village. 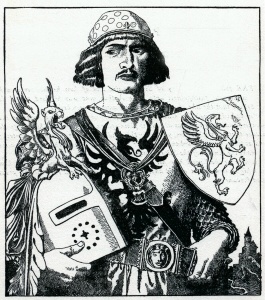 However, the day after I received your letter, I noticed there were men following me wherever I went. And my own spies said that the men arrived on the boat with your letter which leads me to believe that someone at least believes the contents of it and this troubles me.

You are right to think that a device that travels in time should not fall into the wrong hands. If it were me, I would destroy the device and any such documents that attest to its creation. I know that is probably not what a man of learning such as yourself wants to hear, but the world is not ready for such a thing. We have enough trouble in our time; we have no right to travel to others taking those troubles with us.

I would also recommend that you get yourself to a safe place. Unfortunately, I am not familiar with your village and what might be near enough for you to turn to, but please do not put yourself in jeopardy.

As to my own quest, I would gladly accept any guidance you can give me. As you claim to know, this is a quest that my King has devoted himself and all his knights to. Any aid you can give us would be greatly appreciated. We have already sacrificed too much to a purpose that seems unsolvable.

With faith that you will be safe and Goodness will guide your decisions,

By the time this reaches you, I intend to be unfindable. When your courier arrived, I knew what to do as soon as I read your letter.

This letter is being trusted to your courier along with a crate containing two items:

Thank you for your aid in this. The words of a man such as yourself gave me the courage to stop myself from using the device again and trying to change history. I know that you will do what is right.

I hope the Grail is enough to satisfy your king.

To never be seen again, 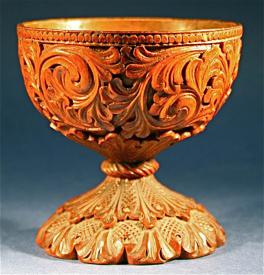 One thought on “Sir Gawain and the Priest”