This story was inspired by a painting created by Biz Boston, my sister. It hangs in my home office. I see it every day, and I often make up stories for how this gorilla ended up with a flower sitting on a bench. 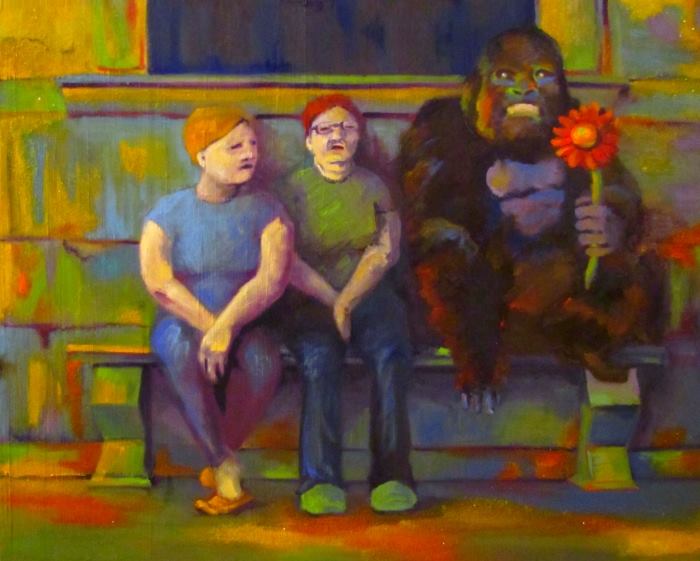 When I arrived at the zoo, the zookeeper thought the delivery man said, “Gus has arrived.” But what he actually said was “G.U.S. has arrived.” The difference is that the way the zookeeper heard it, Gus became my name. What was actually meant was that a Gorilla Under Sedation had arrived.

My life at the zoo was normal until the little girl with the purple rain coat started to visit.

She started coming in the spring. At first I paid her little attention just like most of the visitors to the zoo. She would come and stand at my pen and just wait to see what I would do. One day I decided to go to the edge of the pen where she was standing to see how she would react. She was not afraid of me, even when I pretended like I was throwing poop. It was just dirt clumps. She didn’t react other than grinning at me, but the taller person she was with came to get her at that point. I thought she might not come back after that.

I was wrong. She was back the next day.

Instead of behaving badly, I wanted to impress her. This time, I picked her a really great stick out of my pen and took it over to the spot where she stood. I put the stick against the glass so she could see it. She smiled at me.

The next day she was back and this time I sat by the glass and just looked at her. She put her hand flat on the glass. I didn’t know what it meant but she smiled anyway.

She came to see me every day, and we took turns showing each other cool things. One day she sat by the glass and I could hear her humming. I liked her humming.

The next day I tried to hum for her. Most of the visitors seemed freaked out by the sounds I made, but not the little girl. She just smiled.

Every day I waited for her and it was the best part of my life at the zoo.

During late summer, the zoo had a benefit. The zookeeper gave a speech about how I was thriving in the zoo and one of the favorite exhibits that visitors came to see. I was glad that he seemed pleased with me, but I didn’t know what any of that meant.

I just looked forward to seeing the girl in the purple rain coat every day.

Round about that time, she started to bring me a flower every day. She would sit it next to the glass so I could see it. The flowers were different kinds: tulips, roses, daises, etc… she even brought a bird of paradise one time. Each time she brought a flower, she would tell me what it was called. I always listened very carefully so I could remember the name. I also studied the flowers intently because they were always swept up each night.

In the fall, the weather began to change and leaves began to fall. The little girl still came to see me most days, but not every day. I didn’t understand this, but I was happy on the days she did come.

Then several days went by and she didn’t come. I was very sad. After a couple of weeks, I lost hope. I didn’t understand why she didn’t come any more.

I wasn’t very hungry and didn’t feel like eating. The zookeeper said that I wasn’t looking well and that something needed to be done.

I never really understood what the zookeeper wanted of me; I just wanted to see the girl with the purple rain coat again.

A couple days after the zookeeper noting my declining health, I saw the taller person who usually came with the girl outside my pen just standing on the other side of the glass staring at me. When she saw that she had caught my eye, she bent over and placed a flower by the glass and then turned and left.

She didn’t tell me what the flower was, but I remembered thinking it reminded me of the sun. I also knew this person could lead me to my friend.

I decided to leave my pen and get the flower. It wasn’t actually that difficult to get to the flower. Once I had the flower, I ran as fast as I could after the tall lady.

As I was running after her, I heard screams and people scrambling. She must have heard them too because she stopped and turned in my direction.

I ran up to her clutching the flower waiting for her to move again.

It was then I noticed she was crying. She saw the guards and zookeeper approaching and she must have seen the desperation in my eye.

She grabbed my hand and pulled me after her. We ran for a long way until we couldn’t run anymore. When I looked around I could see that we were still in the park surrounding the zoo.

The lady sat down on a nearby bench and began to sob. I decided to sit next to her until we moved again.

“We can’t out run them. I’m too old for this.” She looked up at me and said, “It’s a sunflower. She wanted you to have it. She grew it in her garden. She asked me to bring it to you. It was her last request.” Then she sighed a deep and cleansing breath. She patted my knee and walked away.

I was going to follow her but I began to feel very sleepy.

When I woke up, I was back in my pen and the perimeter had changed. The fences were now made to keep me in.